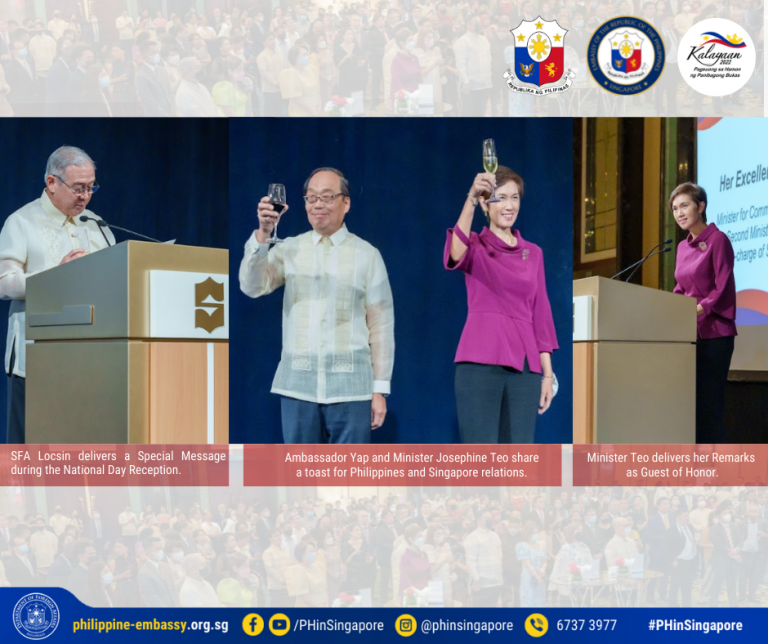 (22 June 2022, Singapore) – With the stabilization of the COVID-19 situation in Singapore and the easing of the country’s Safe Management Measures (SMMs), the Philippine Embassy in Singapore, led by Ambassador Joseph del Mar Yap, hosted its first in-person Diplomatic Reception, after two and a half year hiatus, in commemoration of the 124th anniversary of Philippine Independence on 15 June 2022, at the Shangri-La Hotel Singapore.

In his last Independence Day remarks as Philippine Ambassador to Singapore,  Ambassador Yap expressed his gratitude to everyone who supported him in his role as the Philippine representative to Singapore. “I am truly grateful to have Singapore as one of the Philippines’ closest and oldest friends in the region. It has been a great honor and privilege for me to serve as Philippine Ambassador to Singapore and to contribute to the strengthening of our bilateral relations.” He also reminded all Filipinos to continue to collaborate to help attain our country’s aspiration. “Let us put our strengths together and work hand-in-hand, in the spirit of bayanihan,  as we rise towards the challenge of a new beginning,” the Ambassador stated in closing.

Her Excellency, Mrs. Josephine Teo, Minister for Communications and Information, Second Minister for Home Affairs, and Minister-in-charge of Smart Nation and Cybersecurity, graced the Diplomatic Reception as the Guest of Honor and representative of the Singapore Government. Minister Teo acknowledged the excellent state of bilateral relations and the enduring friendship between the Philippines and Singapore, which spans more than 50 years.

Also present in the reception were Philippine Secretary of Foreign Affairs, His Excellency Teodoro L. Locsin, Jr., and Mrs. Maria Lourdes B. Locsin. Secretary Locsin congratulated Ambassador Yap for elevating Philippine-Singapore relations to greater heights over the past four and half years. Secretary Locsin concluded his remarks with a toast to the steadfast ties between the two countries and to the good health of both Singapore President Halimah Yacob and Prime Minister Lee Hsien Long.

Highlights of the program included the introduction of the officers and founding members of the newly-registered Philippine Chamber of Commerce in Singapore, the creation of which was made upon the recommendation and support of the Ambassador;  as well as a video presentation produced by the Embassy in partnership with Rated J, an online public affairs program for Filipinos in Singapore. The video put a spotlight on the strength and dynamism of the bilateral ties between the Philippines and Singapore during the four and a half-year tenure of Ambassador Yap. The video presentation may be accessed through this link (https://www.youtube.com/watch?v=u_6iXPYOvJM).

The reception was also an excellent occasion to showcase the best of Philippine culture offering a feast for the senses. Officers and staff of the Philippine Embassy were dressed in their best barong Tagalog and formal Filipiniana wear. Singapore-based Filipina soprano Angela Cortez serenaded the crowd with her rendition of Original Pilipino Music (OPM), Paraiso and Panalangin; and Reflection, a song from the Disney movie, Mulan, sang by award-winning Filipino performer, Ms. Lea Salonga.  Philippine favorite dishes such as lechon, pancit, sisig and well-loved desserts halo-halo, taho, and Filipino-flavored ice cream, which were donated by both established and up-and-coming Filipino businesses in Singapore, were served to the delight of the guests. Gift bags bearing pasalubongs containing travel bags from the Department of Tourism (DOT) and the Tourism Promotions  Board (TPB), choco-dipped dried mangoes, oil products from Kokus Nuss and tourism brochures, were also given to the guests as souvenirs.

In support  of the Embassy and to add to the celebratory mood of the occasion, Filipino and Singaporean companies/enterprises  such as Philippine Airlines, Cebu Pacific, Crimson Hotel Boracay and Quest Plus Mimosa Leisure Estate from Filinvest Development Corporation, Jurong Bird Park (JBP), and Wine and Whisky which is the local distributor of Arc Gin and Vodka,  provided prizes that were raffled to lucky winners. Prizes included round trip tickets to the Philippines, hotel accommodations, entrance tickets to JBP and bottles of spirits. 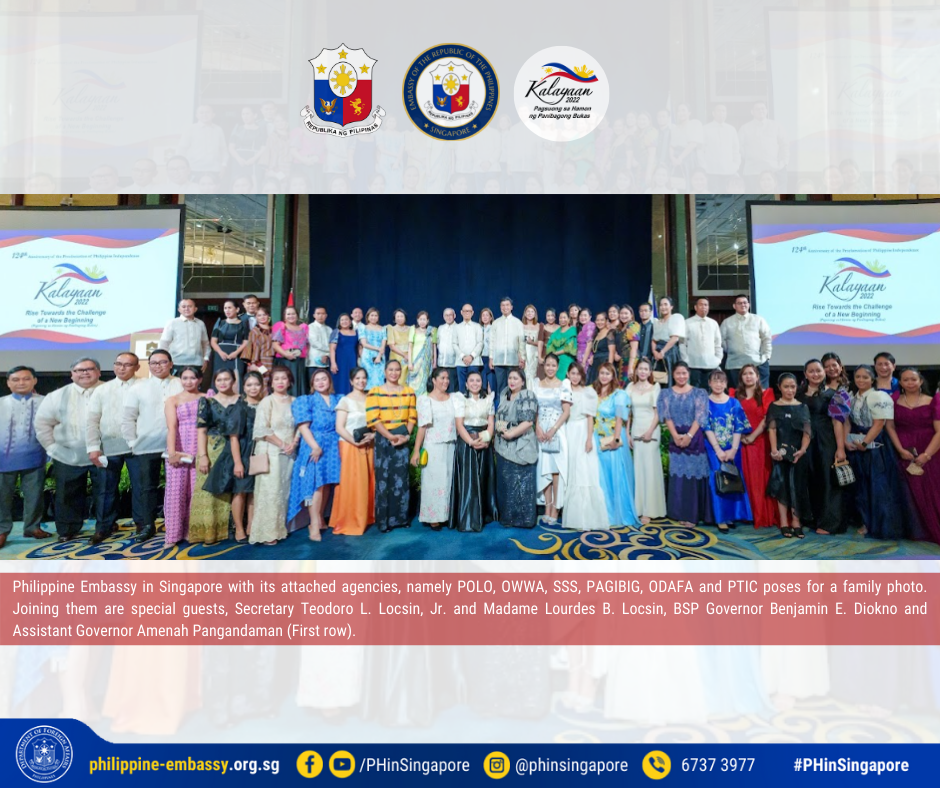 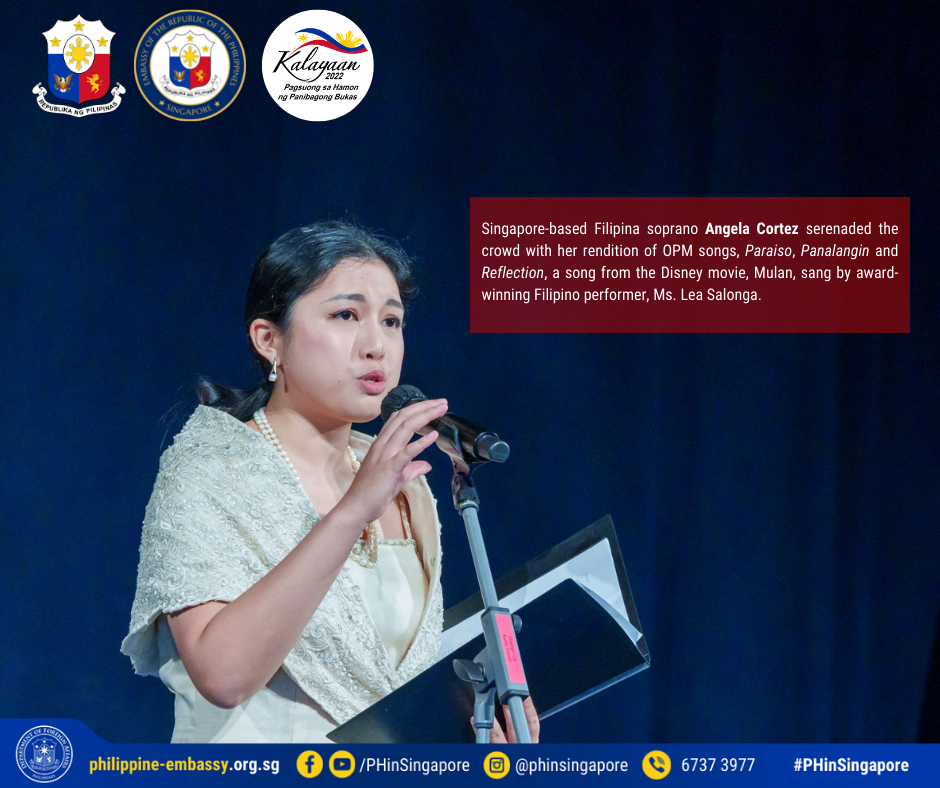