30 June 2022, Singapore – Philippine Ambassador to Singapore, H.E. Joseph del Mar Yap concludes his tour of duty today, after serving in office for four and a half years since 05 January 2018.

During his tenure as Ambassador, Philippines-Singapore bilateral relations grew from strength to strength in many key areas, including defense and security, economic trade and investment, culture and people-to-people links. In 2019, the Philippines and Singapore celebrated the 50th anniversary of diplomatic ties. This milestone celebration was commemorated with a total of 28 year-round activities, which highlighted the breadth and depth of our bilateral relations. The Golden Jubilee celebration was capped by the State Visit to the Philippines by Her Excellency President Halimah Yacob in September 2019, during which 8 bilateral agreements on various fields of cooperation were signed.

On the economic front, Ambassador Yap spearheaded the Philippine-Singapore Business and Investment Summit (PSBIS) which brought together a powerhouse group of the Philippines’ top economic and trade officials to increase two-way trade and investment opportunities between the two countries. The PSBIS has been convened thrice since 2019, the third and most recent edition of which was held virtually on 27 April 2022.

Under his initiative and guidance, the Philippine Chamber of Commerce in Singapore (PhilChamSG) was created to boost trade and investment among the Philippines, Singapore, and ASEAN member states, with the chamber ready to provide information, facilitate connections, and empower joint entrepreneurial success for businesses. PhilChamSG was first organized in 2019 and was finally registered with the Registry of Societies on 29 April 2022. The Officers and founding members of the Chamber took their oath of office last 13 May 2022 before Ambassador Yap, and were formally introduced during the Philippine National Day Reception on 15 June 2022 at the Shangri-la Singapore.

The promotion of the welfare of the Filipino Community in Singapore remains a top priority of Ambassador Yap. During his tenure, the Embassy embarked on upgrades in many aspects of our consular services to improve its overall service of the Embassy to its clientele.

The Embassy has significantly shortened the waiting time for an appointment for Embassy services, from several months to within one week from booking date. In 2018, the Embassy started the practice of opening one Sunday each month, in addition to the regular Monday to Friday schedule, to provide one more day of consular and labor services for those who prefer to come on Sundays. To assist clients in their needs, self-service photocopiers, food and drink vending machines and a water dispenser were made available in the consular waiting area.

In addition, a shuttle service between the Embassy and the nearest mass transit station was started in 2019, to serve clients who would otherwise have to walk 15 minutes either in the hot sun or rain.

The Embassy was also one of the first foreign service posts to provide the option for cashless payment starting in December 2020. An online appointment system and a digital queuing system integrating all types of Embassy services, including those from partner agencies, have been completely installed. The Reception area and perimeter security fence were also upgraded and reinforced. In 2021, the Embassy also constructed a covered walkway from the entrance gate to the Consular area for the comfort and protection of Embassy clients against the rain and the sun.

To supplement the Embassy’s passport renewal services, the ePassport Renewal Center-Singapore (PaRC) under VFS Global, was inaugurated on 28 January 2022 by Secretary of Foreign Affairs Teodoro L. Locsin, Jr. The PaRC serves as the very first off-site location in the Asia-Pacific region for simple passport renewal applications, where qualified applicants can simply walk-in to renew their passports.

During Ambassador Yap’s tenure, the Embassy also conducted two overseas voting in Singapore: a midterm national election in 2019 and a Presidential election in 2022. During the recent voting exercise from 10 April to 9 May 2022, a total of 52,908 voters, out of 84,877 registered Filipino voters in Singapore participated in the overseas voting, translating to a voter turnout rate of 62.33%. This is the 2nd highest in the Asia-Pacific region; and the third highest in the world by absolute number. The voter performance this year was the highest that the Embassy has ever recorded since overseas voting began in 2004. To make the voting process faster, more convenient and safer for all kababayans who are registered voters in Singapore, the Philippine Embassy launched an online pre-verification system to reduce the queue waiting time at the Embassy.

“I am humbled and heartened to know that in my four and a half year-tenure in Singapore, the Philippine Embassy, as a whole, has been able to collectively engage the government and people of Singapore in a positive, remarkable and meaningful manner, that not only enhances our bilateral relations, but also continues to protect and promote the interests of our people working and living here in Singapore.” Ambassador Yap said.

Ambassador Yap expresses his appreciation and heartfelt gratitude to all the Embassy personnel and its attached agencies, for their dedication, hardwork and support throughout his tenure.

Prior to his appointment, Ambassador Yap was a successful business executive with more than 40 years of experience in the private sector. He was also the Special Envoy of President Rodrigo Roa Duterte to Singapore from November 2016 to June 2017. 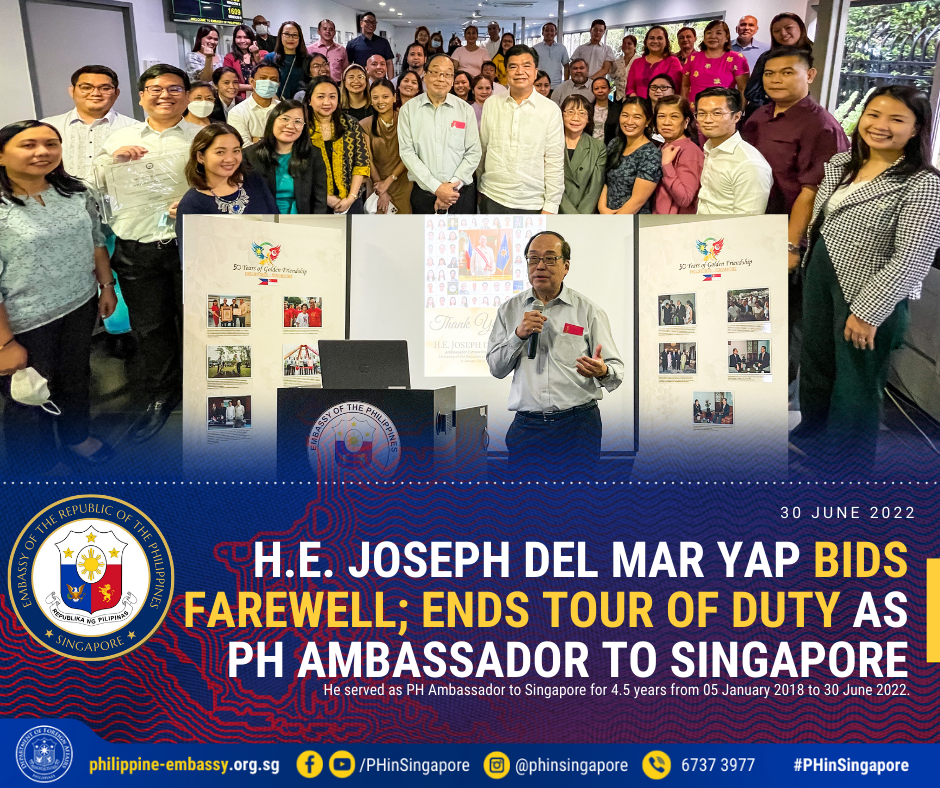 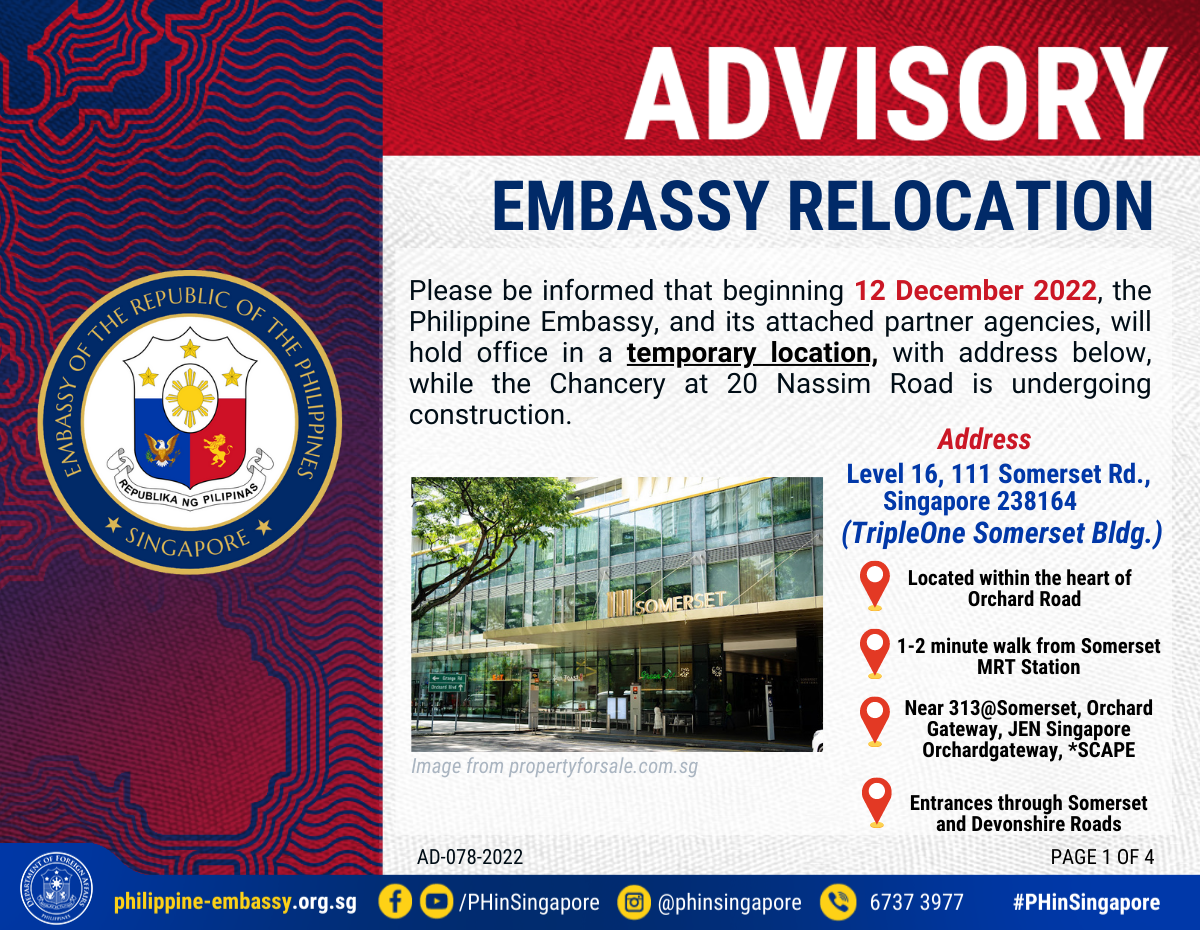 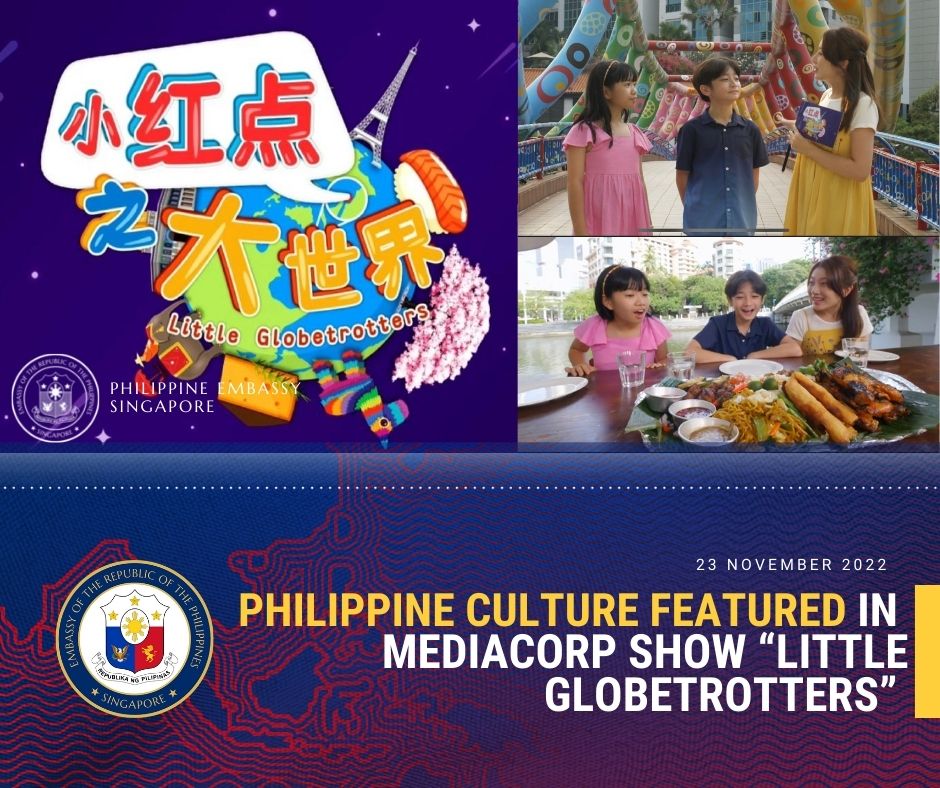 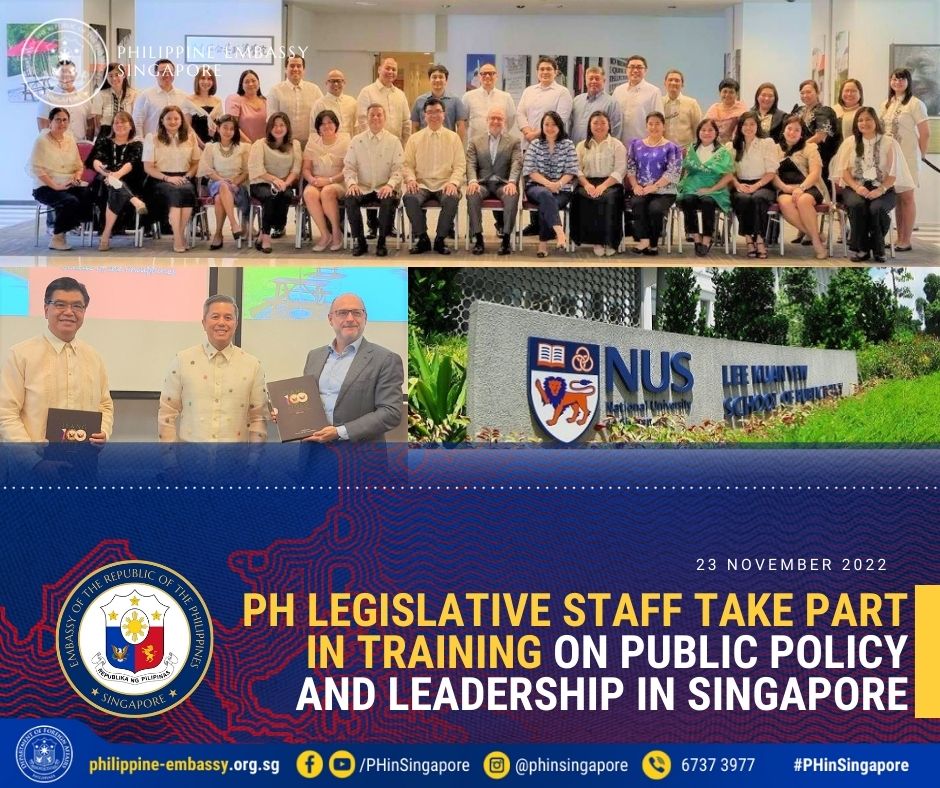