PR-027-2022
12 May 2022, Singapore – Philippine Ambassador to Singapore Joseph del Mar Yap expressed his heartfelt appreciation to the Filipino community in Singapore for their active and enthusiastic participation in the 2022 Philippine Overseas Voting which was held from 10 April 2022 to 9 May 2022 at the Philippine Embassy in Singapore.

A total of 52,908 voters, out of a total of 84,877 registered Filipino voters in Singapore participated in the overseas voting, translating to a voter turnout rate of 62.33%. This is among the highest in the Asia-Pacific region.

Ambassador Yap also commended the officers and staff of the Embassy and its attached agencies who were deputized by the Commission on Elections (COMELEC) to serve as members of its electoral boards, namely, the Special Board of Canvassers (SBOC),  the Special Board of Election Inspectors (SBEIs), and the Special Ballot Reception and Custody Group (SBRCG), as well as other support staff for their unrelenting service and dedication to perform their election-related duties on top of their regular workload, for thirty (30) continuous days, including weekends and public holidays.

He also extended his appreciation to the Filipino volunteers who served as traffic and crowd control marshalls during the overseas voting period, as well as the poll watchers and members of Filipino media who covered the elections.

“I also wish to thank the Singapore Government, particularly the Ministry of Foreign Affairs and the Singapore Police Force, for providing support to the Embassy to ensure a safe, orderly and efficient conduct of the month-long election exercise in the country”, the Ambassador said.

Interested parties may view the results of the 2022 Overseas Voting in Singapore, which may be found in the Embassy’s official website https://www.philippine-embassy.org.sg/ and Facebook page https://www.facebook.com/PHinSingapore. (END). 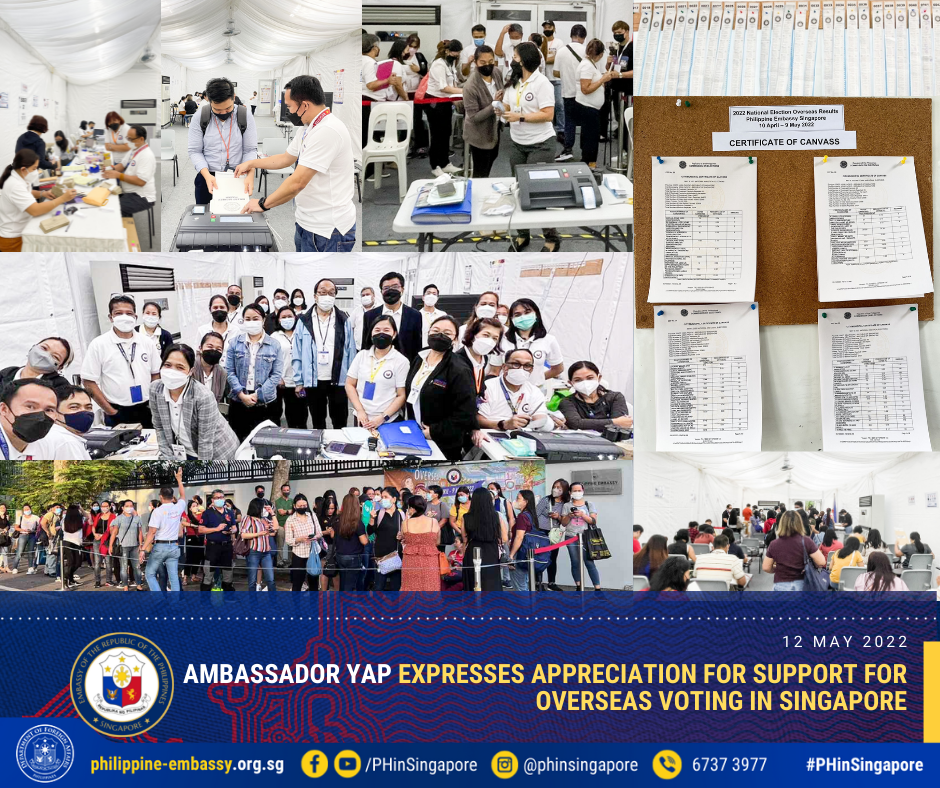