(Singapore, 7 July 2022) Prior to the end of his tour of duty as Ambassador Extraordinary and Plenipotentiary  of the Republic of the Philippines to the Republic of Singapore,  H.E. Joseph del Mar Yap was conferred the Order of Sikatuna with the rank of Datu (Grand Cross) by President Rodrigo Roa Duterte during an awarding ceremony held at the Malacañan Palace on 25 June 2022.

The hardworking diplomat was lauded for his contributions in strengthening and deepening the overall bilateral relations between the  Philippines and the Republic of Singapore.

Ambassador Yap was cited “ for his outstanding dedication and leadership paving the way for the Philippine Embassy in Singapore to secure almost 700 million pesos worth of assistance for the country’s COVID-19 response;

For his commendable actions in raising 2 million pesos worth of donations of personal protective equipment and vitamins from corporate and civic organizations benefitting the Filipino community; and

For his many laudable initiatives to foster amity and mutual appreciation between the Philippines and the Republic of Singapore.”

Ambassador Yap served as the Philippine Ambassador to Singapore from 5 January 2018 to 30 June 2022. During his tenure as Ambassador, Philippines-Singapore bilateral relations grew from strength to strength in many key areas, including in the areas of defense and security,  trade and investment, cultural exchange and people-to-people links. During Ambassador Yap’s term, the Philippines and Singapore celebrated the 50th anniversary of the establishment of diplomatic ties in 2019.

On the economic front, Ambassador Yap launched the inaugural Philippine-Singapore Business and Investment Summit (PSBIS) in 2019, which brought together a powerhouse group of the Philippines’ top economic and trade officials to discuss trade and investment opportunities in front of 300 top business executives. The PSBIS has been convened thrice since 2019; the third and most recent edition of which was held virtually on 27 April 2022.

Under his initiative and guidance, the Philippine Chamber of Commerce in Singapore (PhilChamSG) was created to boost trade and investment among the Philippines, Singapore, and ASEAN member states, with the chamber ready to provide information, facilitate connections, and empower joint entrepreneurial success for businesses.

The promotion of the welfare of the Filipino Community in Singapore was a top priority of Ambassador Yap. During his tenure, the Embassy embarked on upgrades in many aspects of our consular services to improve the overall service of the Embassy to its clientele.

“I am humbled to have been conferred with the Order of Sikatuna with the rank of Datu by President Rodrigo Duterte. I consider this as an affirmation of the positive contributions that we have made as Philippine Ambassador in strengthening and expanding the already excellent relationship between the Philippines and Singapore. I share this accolade with the men and women of the Philippine Embassy and the 200,000-strong Filipino community in Singapore. I wish to thank the President and the Secretary of Foreign Affairs Teodoro L. Locsin Jr. for this honor.” Ambassador Yap said.

The Order of Sikatuna is an order of diplomatic merit conferred upon individuals who have rendered exceptional and meritorious services to the Republic of the Philippines; upon diplomats, officials, and nationals of foreign states who have rendered conspicuous service in fostering, developing, and strengthening relations between their country and the Philippines; or upon personnel of the Department of Foreign Affairs (DFA), both in the home office and in the foreign service. END. 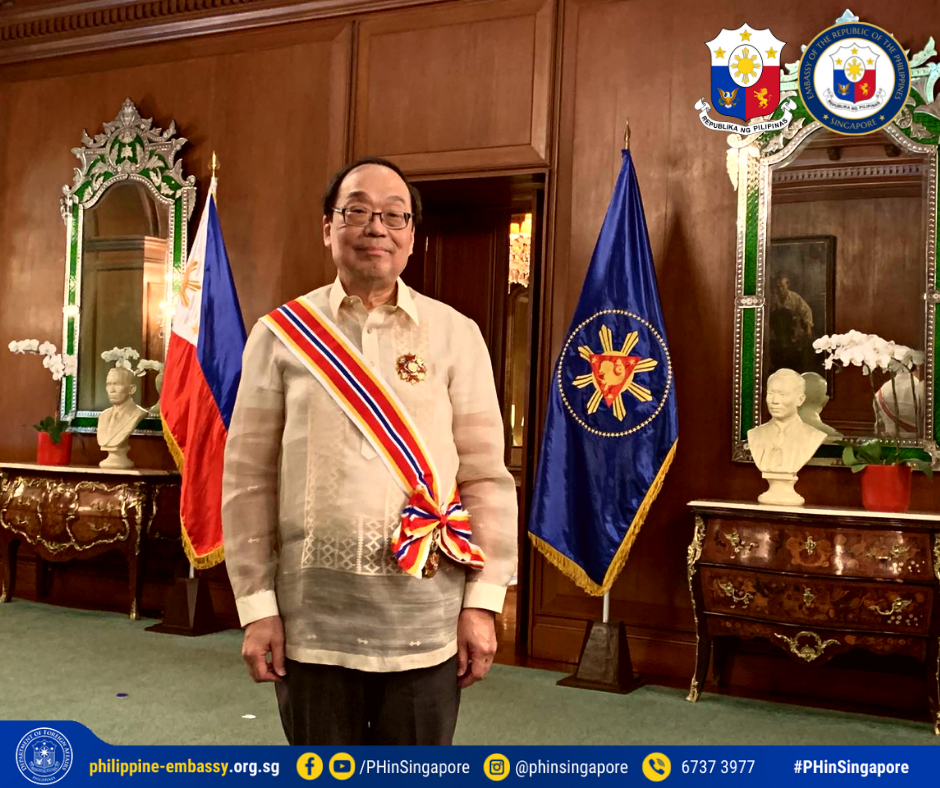